Have you ever heard about a product that is referred to as”Jesus in a bottle?” Also, fans insist that the Lotion P50  1970″is life-changing!”  Biologique Recherche is a French Cosmetics Company.  Moreover, the company’s founders,Dr. Phillipe Allouche, a Biologist and his wife Josette, a Physiologist, discovered their winning product in 1970.  First, Dr. Allouche developed Lotion P50 1970, in 1970, for his wife.  Furthermore, the Lotion  has been around for almost half a century.  To this day, it is a cult favorite for a number of reasons.  First, Lotion P50 1970 works to make  your skin look brand new.  In addition, your skin will feel like silk. Also important, the Lotion P50 1970 makes all of the products you put on top of it work 10X better!

Where Can You Find Biologique Recherche Lotion P50 1970?

Lotion P50  is a spa product.  Therefore, only professional spas can sell it!   In other words, you can’t go into a Sephora, an Ulta, Barneys, or Neiman Marcus and buy it.  Instead, you can only purchase it from a licensed retailer. And, that means, you can  only get it from certain spas.   In fact, the brand recommends that a trained esthetician prescribe it for you.  As a result, the exclusivity of  it ,being a spa product, is another reason the Lotion became so popular.  Even more, half a century later, it is still a cult favorite. In fact, the people who use Lotion P50 can’t live without it.  As a result, the Biologique Rechere Lotion has a huge fan base.  And, I am one of those fans!

What is more, in 2,000, Dr. Allouche came up with a new generation of P50 Lotions.  Now there are three different strength formulas. Only the original , P50 1970 has an ingredient you won’t find in the new generation of products.  Or, for that matter, in any European Skincare Product. The ingredient, banned by Canada and the European Union, is Phenol.

Now, you too can become hooked on Lotion P50.  However, you’ll only find the original and strongest version, Lotion P50 1970, in the United States. One  spa retailer, is in New York and Philadelphia. It is called the Rescue Spa.  Their products are sold on their Website,  Shop Rescue Spa.  Also, the Lotion comes in 3 sizes . First, a travel size , 1.7 oz, costs $30.  Next, a medium, 5.1oz. size costs $68.  Last, the largest, an 8.5oz.bottle costs $103.  Moreover, you can also get Lotion P50,  which is closest to the original  formula , except it is without the ingredient, Phenol.  Also,  the Lotion P50W is for those of you who have sensitive skin.  And, Lotion  P50V is ideal for plumping and toning your skin.  Finally, Lotion P50PIGM is best for brightening and diminishing dark spots on your skin.

What Ingredients In  Biologique Recherche Lotion P50 1970 Make It Different Than Everything Else? 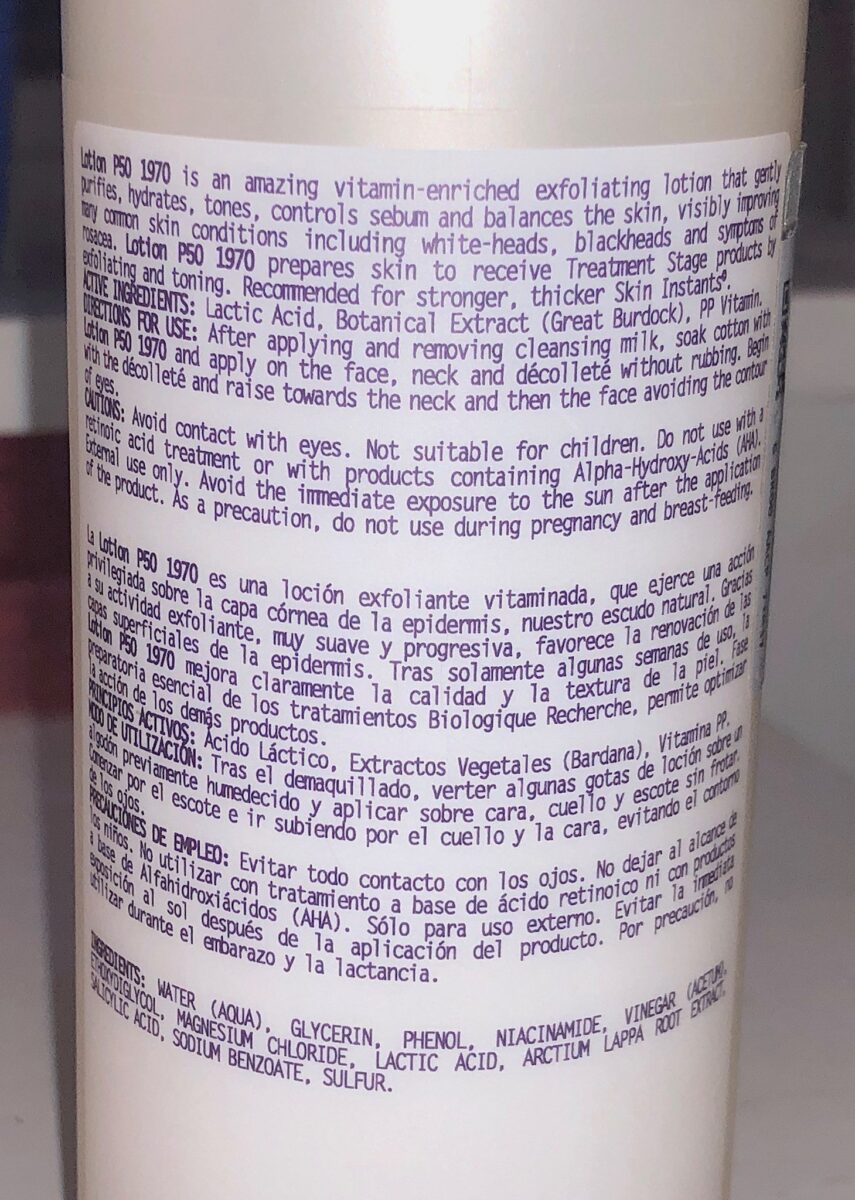 For one thing, Lotion P50 1970 smells stinky!  Also, immediately when you apply Lotion P50 1970, there is a minute where your skin feels a strange, numbing, tingling sensation.  This sensation is called “the burn.”  And, the fans of this formula wouldn’t have it any other way.  For example, if someone switches to any next generation BR Lotion P50’s, they agree that they all miss “the burn.”  And, for whatever reason, I agree with them.  Actually, I really like the feeling of “the burn.”  And , maybe it is my imagination, but I think the burn let’s me know the Lotion is working!

However, the burn only happens with the original Lotion.  For one thing, Phenol is the ingredient that causes ” the burn” . According to Cosmetics Info., Phenol has anti-microbial and exfoliant qualities.  Also, Phenol has a mild numbing effect, called “the burn.”  For example, Phenol is numbing, so it is one of the ingredients in Chloraseptic, a sore throat spray.  That explains the numbing effect!  Also,  Phenol is in some mouthwashes here in the US!

According to EWG, (Environmental Working Group, they rate Cosmetics here in the US), they rated Phenol  7.  The fact that they gave Phenol a 7 means they think it is highly hazardous.  However, the EWG loves to scare the crap out of everyone when it concerns their beauty products!

So, what other ingredients are in this watery, chemical exfoliator that tingles, shrinks pores, and stinks?  First, Dr. Alloute’s effective formula is a unique combination of hydroxy acids that exfoliate your skin.  For example, the ingredients include lactic acid and cider vinegar.  Both of these ingredients allow the formula to clear up acne and improve skin tone.

Moreover, B3 is included because it strengthens the epidermis, and balances the surface PH levels of your skin.  In addition, B3 helps enhance the renewal of the epidermis.

In other words, the formula is an alpha hydroxy acid blend with niacin that has anti-acne and anti-inflammatory properties on your skin.

Even better, the formula includes a high number of quality botanicals! 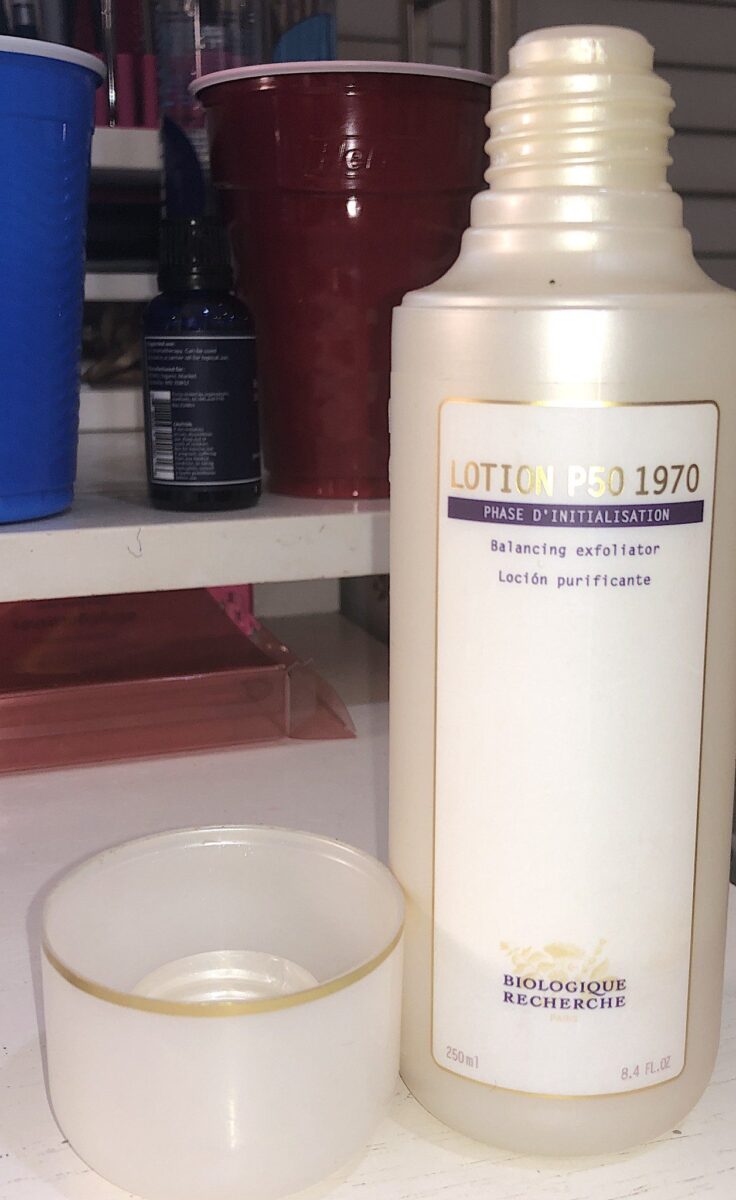 THE PACKAGING LOOKS LIKE A PRESCRIPTION, OR SOMETHING VERY SCIENTIFIC

To start, those who use Lotion P50 1970 swear it is the most important product they use in their skincare regime!  I am one of those people!  I agree with all the other fans, I can’t live without it.  As a result, I am on my fourth bottle!

To begin with I wanted to get rid of my pimples. And, I’m a blogger, and my job is to research all kinds of cosmetic and skincare products.  Obc It worked!   I got rid of my pimples.  For months, I  tried everything, from pimple creams to copper soaps.  In addition, I was constantly changing my skincare product, and skincare brands.  Finally, I was so frustrated, I decided to try Lotion P50 1970.  In fact, at the time I really didn’t know much about it.  All I did knew was the other products were not working.  I was still breaking out!  Even worse, all of the pimple products were drying out my skin! 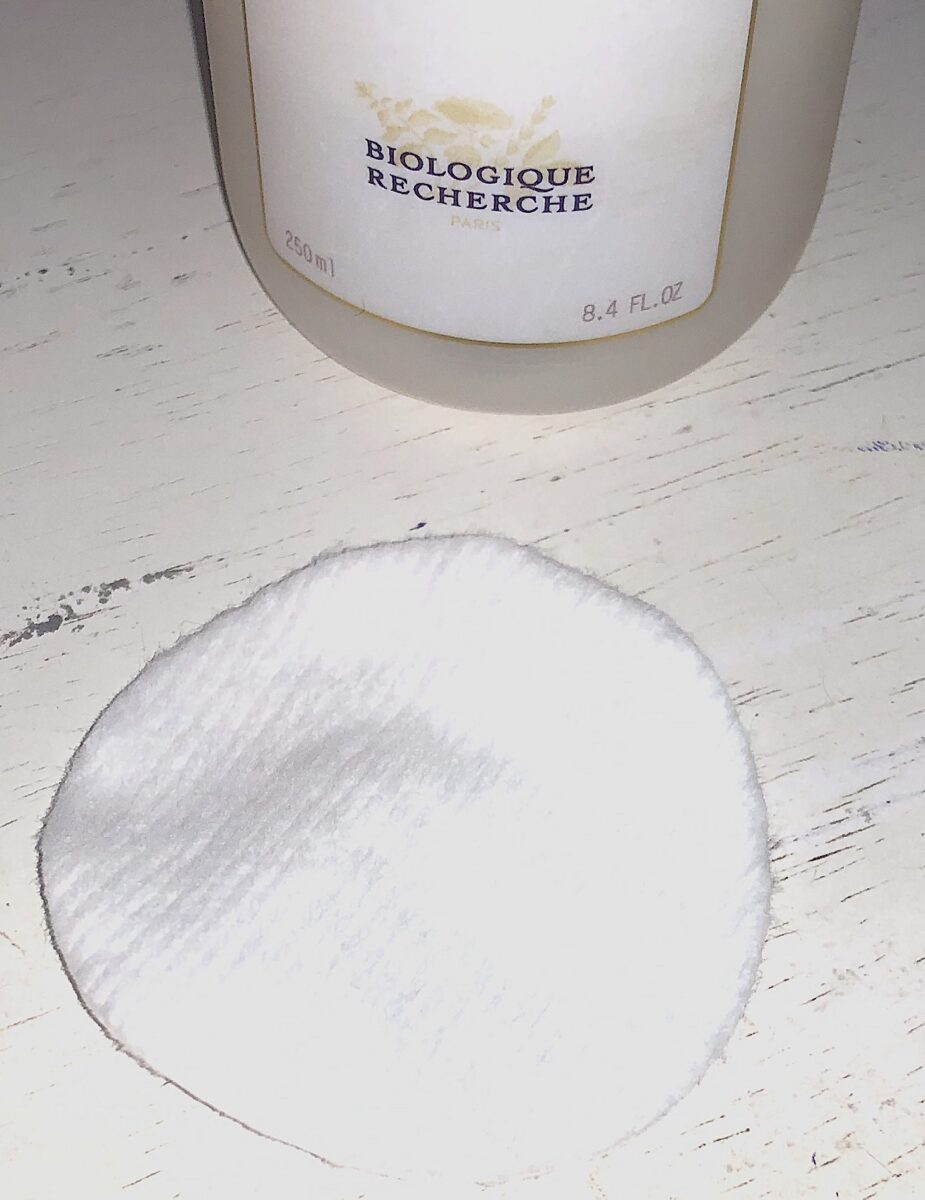 Finally, after using the original Lotion P50 , within six weeks, my skin was really cleared up.  And then, I ran out of my first bottle.  But, I thought I was cured. I wasn’t going to order more Lotion P50!  For one thing, it’s expensive!   Although, after missing about a week, my face started breaking out again!  Sometimes being beautiful, and having clear skin, is expensive!

Of course, I realized I had to get another bottle, or two!   Another result that  I love is the way my skin glows.  I never thought I would have skin that glows. For me, it was enough just to clear up my acne. Yet, my skin is glowing!

It was there that I found  another amazing Biologique Recherche product. And, it is called Fluide VIP O2 .  What I love most is it made my skin glow !  And, when I was leaving, I noticed that all the people who work at Rescue Spa also looked like they had glass skin!  At first, I didn’t realize that it was the Fluide VIP O2!  So, I had to have a bottle of that.  And, when my husband got that bill, I was in deep SH………….T!

Finally, according to Dr.Allouche, the Magic in Lotion P50 1970’s is his blend of proven, clarifying ingredients.  Because, these are the same ingredients that exfoliate your skin , get rid of acne, and regulate your skin’s sebum.  Furthermore,  given time, your skin will  glow!  It’s Magic!

Is it worth it?

The rest of the world thinks so!  And, so do I!

It stinks.  It tingles.  And, you’ll feel “the burn.” Still, half a century later, it is as, if not more, popular than ever.  Isn’t that the true meaning of a cult favorite?

It will change your life!  Moreover, after you use it for a while, your skin will have the most gorgeous, healthy glow.  Isn’t that what we all wish for?   I promise you it will change your skin!  And, you’ll see, Lotion P50 1970 will become the most important, powerful , indispensable part of your skincare regime.   Your most beloved product!

Don’t forget about the next generation Lotion P50’s.  For one thing, they do not have Phenol in them.  Also, they are not as strong as the original formula.  However, P50 W is for the most sensitive skin.  P50 V is for skin that needs plumping and toning.  And P50 PIGM will brighten your skin, and diminish dark spots.

The closest formula to the original P50 1970 formula is P50.  And, this is the only product available to the European and Canadians .  It won’t give you “the burn!”  I don’t think I’d like  it as much!  For one thing, “the burn” is part of the experience.  Another reason is, the next generation of Lotion P50s don’t have the original’s strength.  However, if you can get it, you must try the original.  It really is unbeatable!

Please continue the discussion with me in the comments below!  Do you use a product that changed your skin?  If so,  would love to hear about it!  Moreover, if you’ve used any of the next generation P50 formula’s, I would love to hear how you liked them?  And, please let me know which formula you choose.

We are Getting A New Daughter/Aunt/Sister!

PS – My fourth, and last son and last to go’s wedding is this weekend.  I can’t believe all four boys’ll have wonderful, amazing wives!  You’ve seen all of my daughters in law ,including my son’s new wife to be,  on both the blog, and my you tubes.  Her nickname is Jaymooo!  We can’t wait til it’s official, and she is truly a member of the family.  Although,  it’s hard to think she isn’t a member already!

In our eyes, she has been part of the family for the past ten years! (they met freshman year in college) . I’ve always thought of Jaymoo as my daughter!  And, I call her my Angel!  Jaymoo, Your Sister In Laws, Dana, Pinky, and Haley , your nieces Avia, Piper and Sadie, and your nephew, Ace, as well as your three brothers in law, Wicky, Phe Phe, and Kriki,  and  your new in-laws can’t wait to make you officially one of us !