To start with, Gemstones inspired the Limited Edition Urban Decay Stoned Vibes Vault Gift Set! Also, the set includes 10 products.  Furthermore, the pieces are the Stoned Vibes Eyeshadow Palette, the 24/7 Glide on Eyeliner Pencils, a Stoned Vibes multi-faceted highlighter, and Stoned Vibes Multidimensional Lip Glosses.  Even more, the Stoned Vibes Vault Gift Set is for you if you are an Urban Decay Fan.  Also, you might want this collection if you  collect limited edition makeup. Or this set is for you if you like me, just love beautiful Makeup .  You can have a lot of fun  playing with the makeup in this collection.  Also, you’ll be able to create the most dazzling makeup looks. 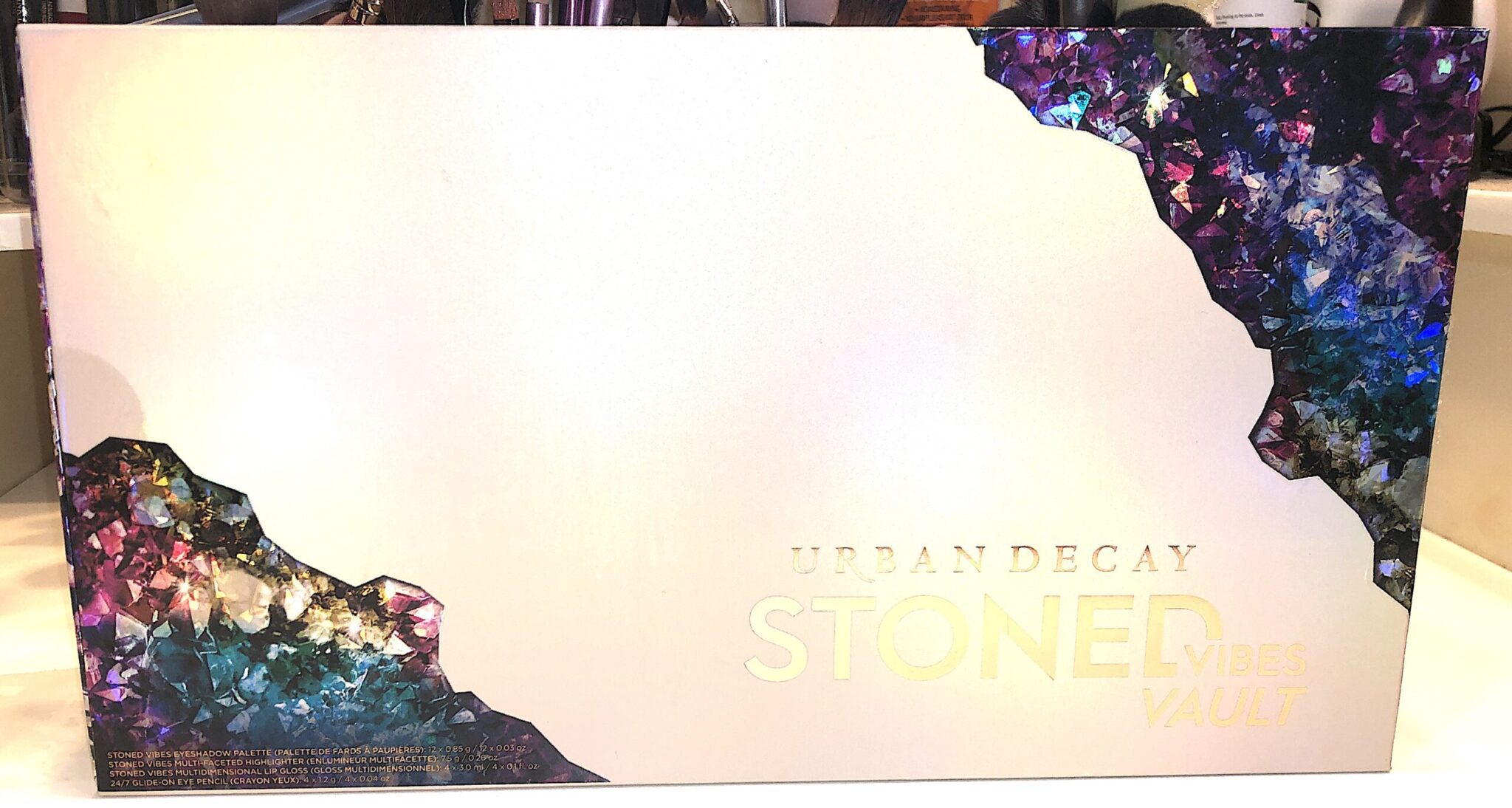 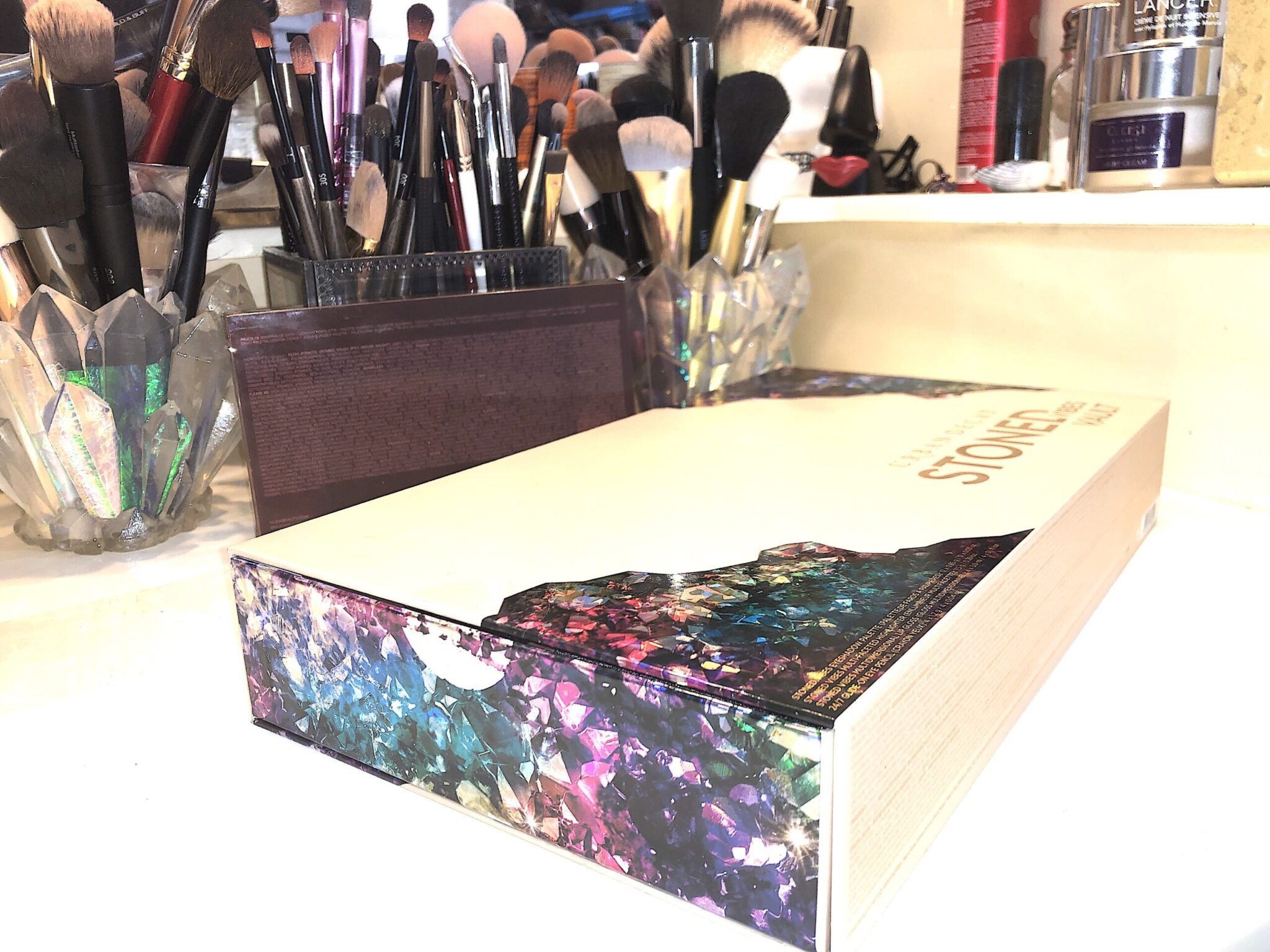 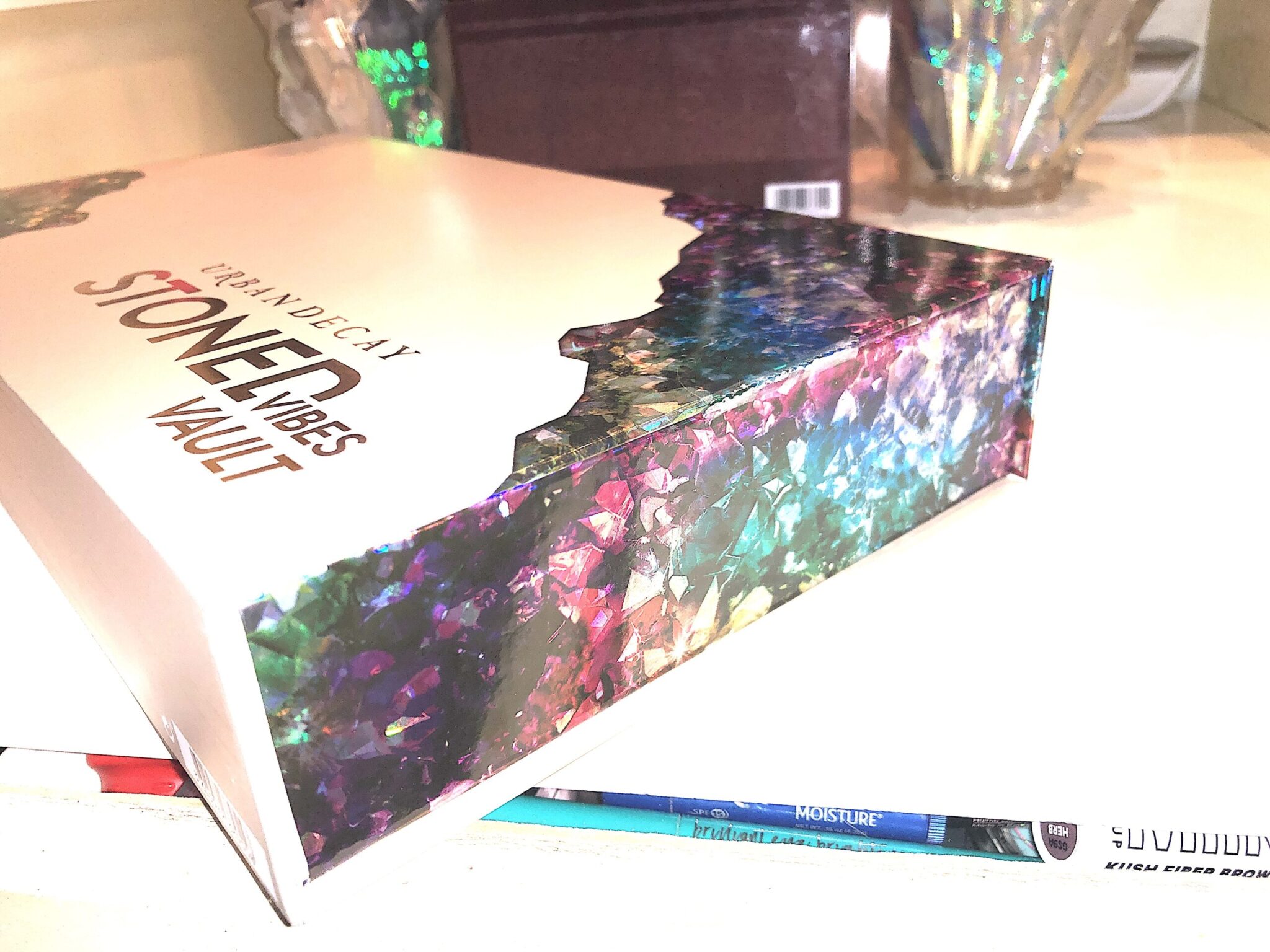 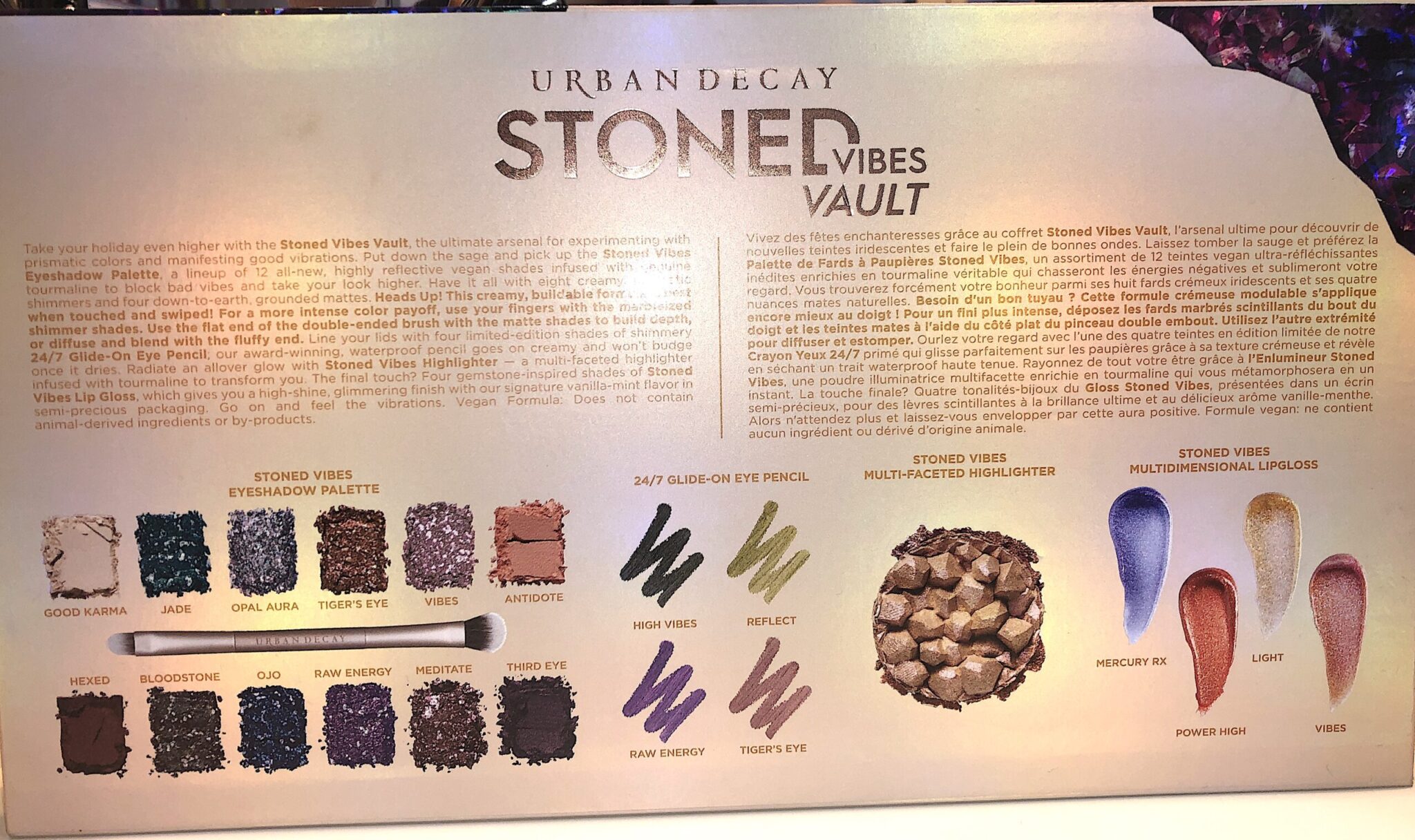 THE BACK OF THE STONED VIBES VAULT GIFT SET BOX

THE INGREDIENTS FOR THE STONED VIBES VAULT GIFT SET

To begin with, The Tourmaline gemstone, a semi-precious mineral.is similar to granite. In addition, tourmaline colors range from magenta to teal-blue, meadow-green to vibrant yellow, and even black.  Also,  tourmaline gets its name from the Singhalese phrase “tura mali,” which means, “stone mixed with vibrant colors.” More, It’s believed that no two tourmaline stones have the exact same color. And, Tourmaline is historically revered as a “magic” stone that is capable of protecting whoever wore it. Although, it might be a stretch to say tourmaline has supernatural powers.  However, it does have the uncommon and very special ability to generate an electric charge and emit negative ions and far infrared rays. 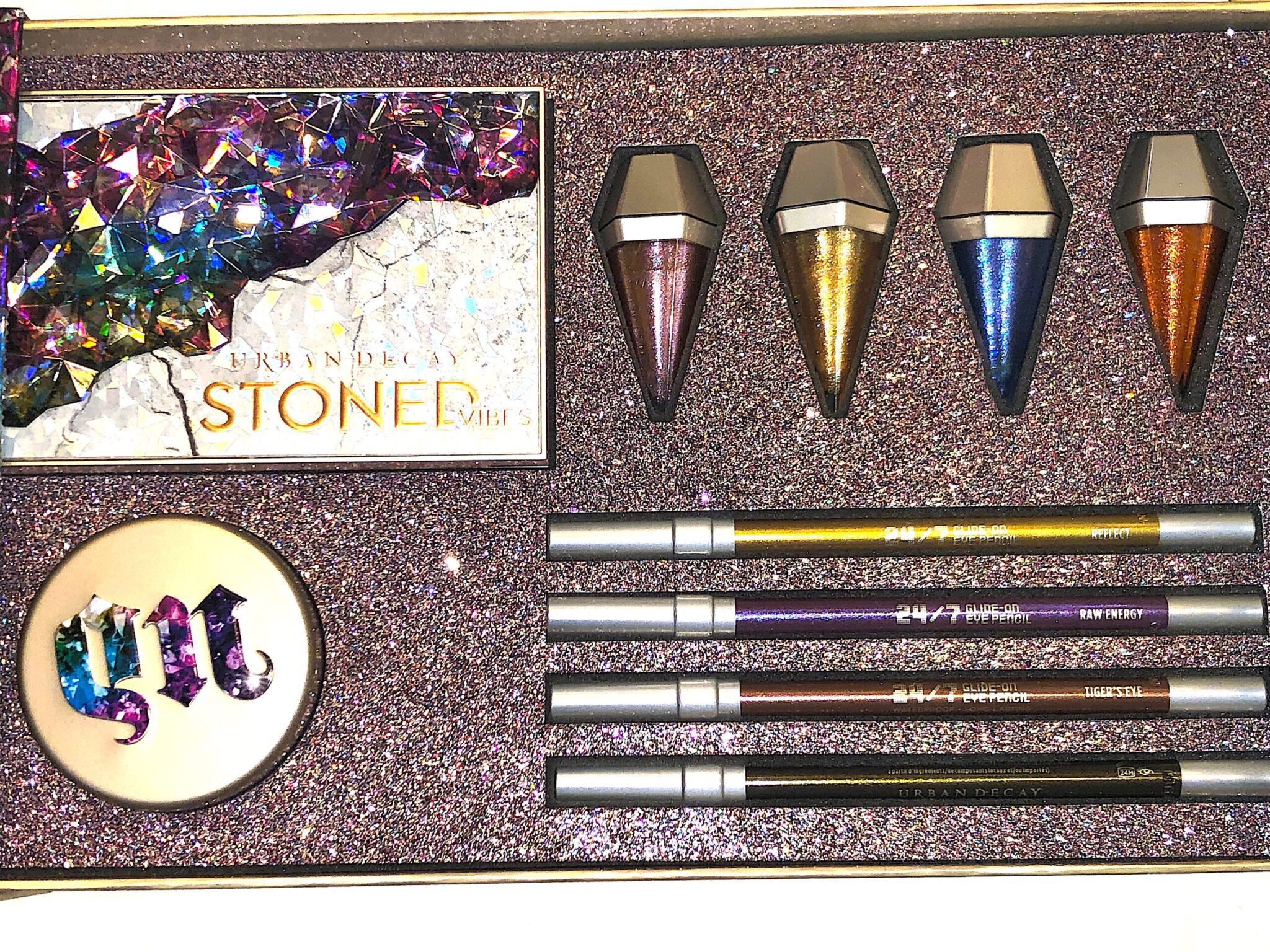 THE PRODUCTS IN THE STONED VIBES VAULT GIFT SET 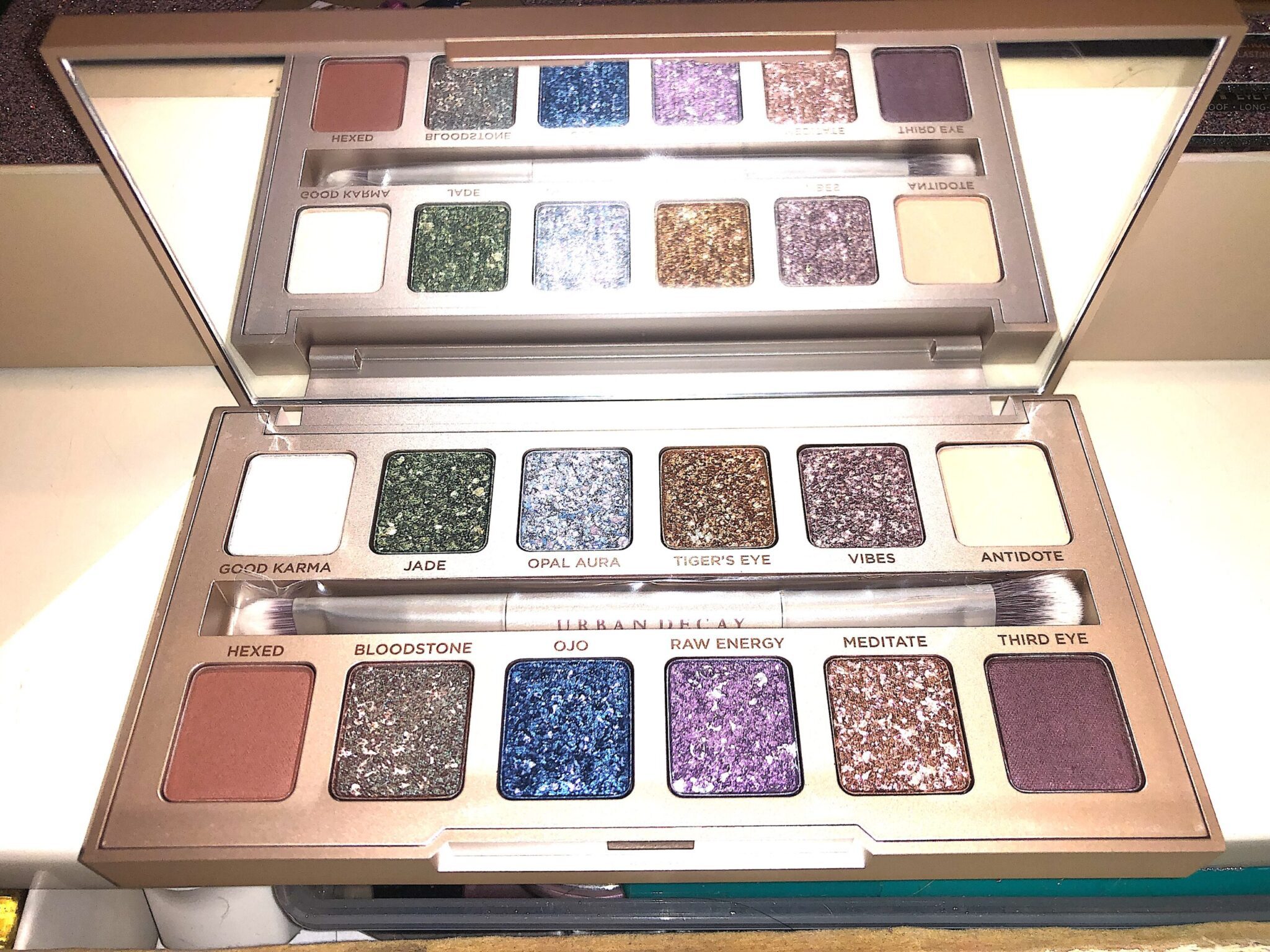 Even more, there are 8 creamy prismatic shades, and 4 mattes.  All of the shade are infused with tourmaline.  Also, the formula is creamy and buildable. 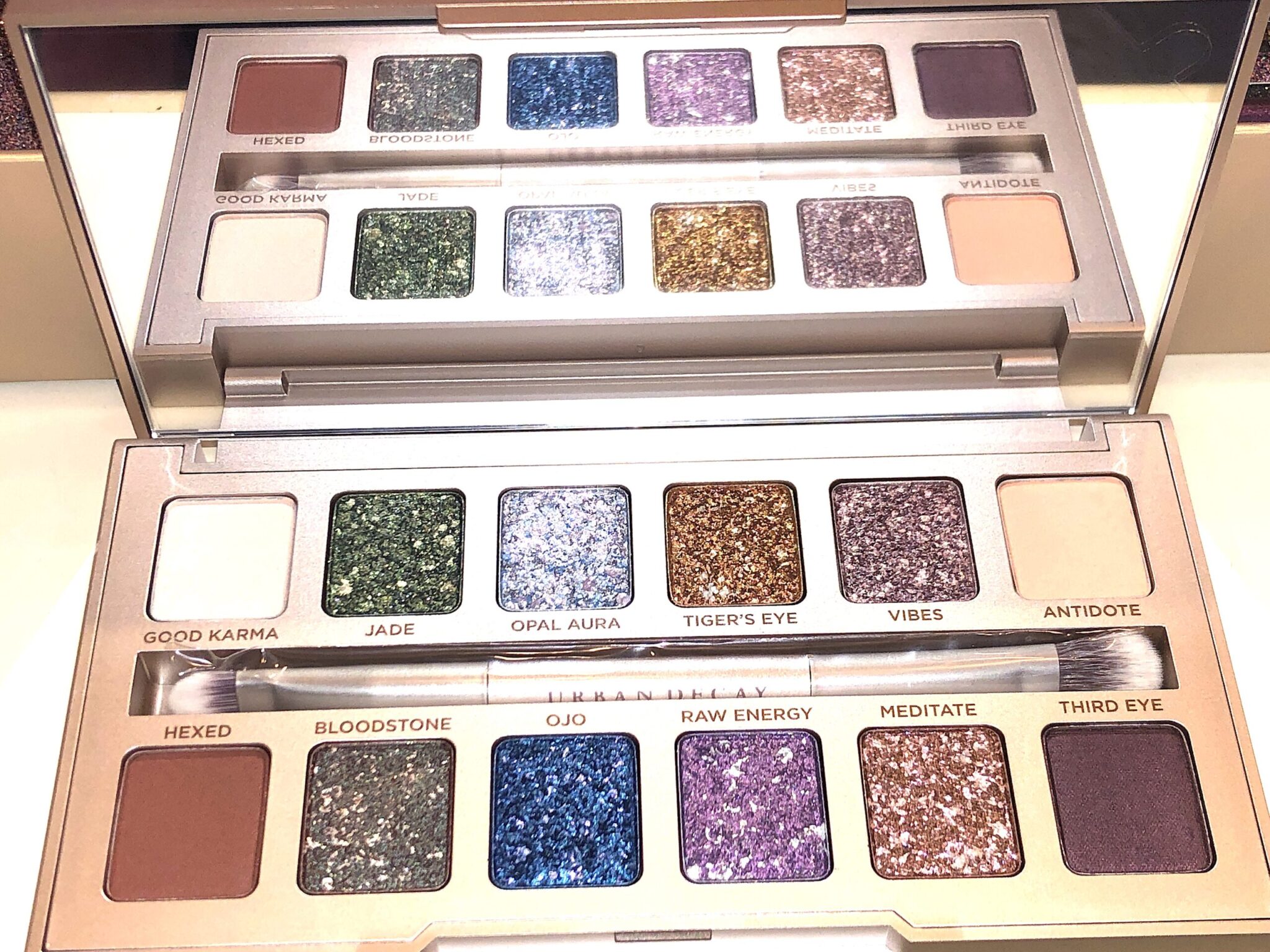 Therefore, according to UD, the marbleized formula works best  when touched , by your fingers, and swiped.

Also, they suggest you use the flat end of the included double-ended brush to build depth with the matte shades.

Or, you can diffuse, and blend with the fluffy end. 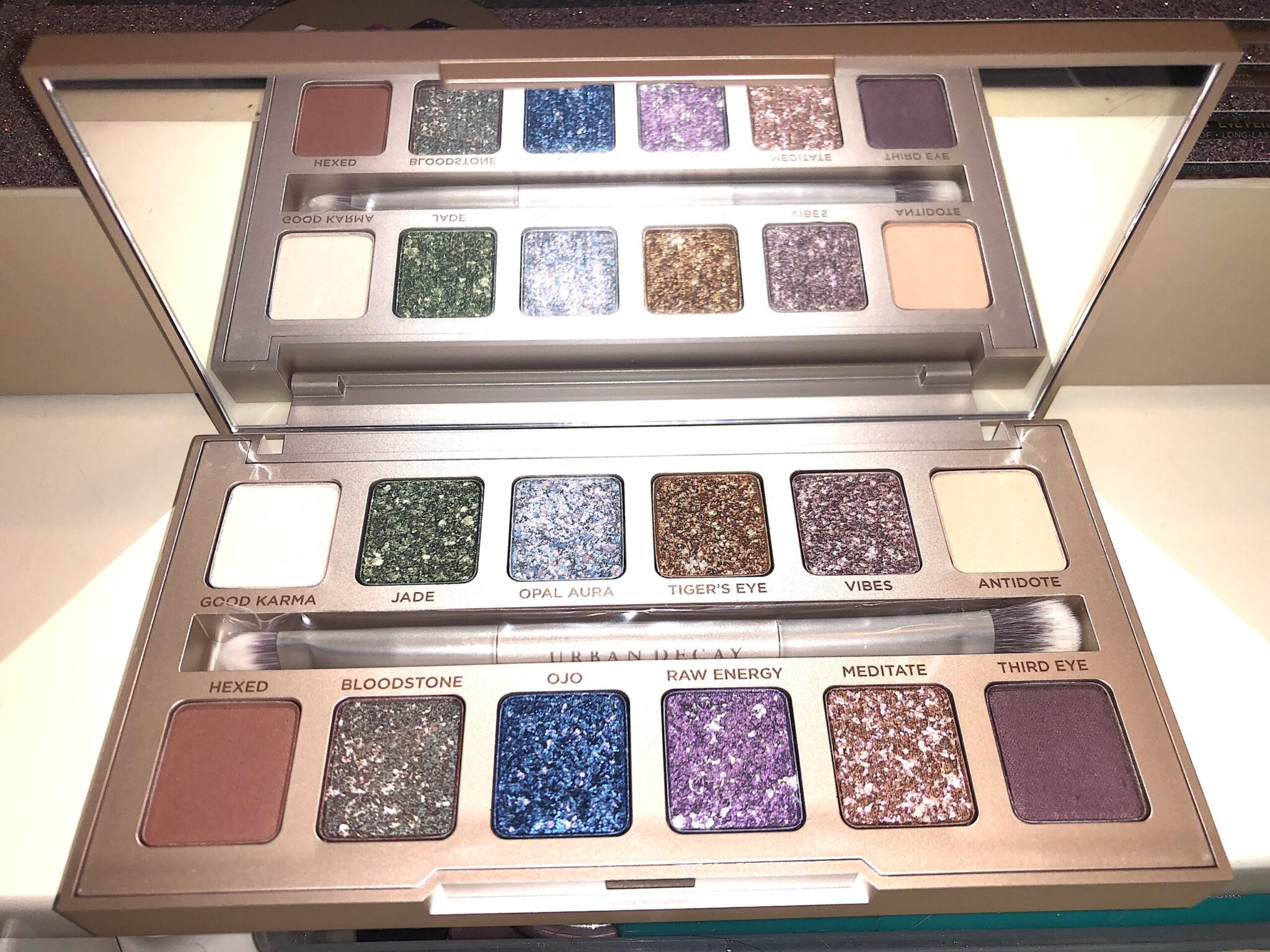 First, Good Karma, an ivory shade, has a matte sheen.

Next, Jade, a green shade, has a micro-glitter, metallic finish.

Also, Opal Aura, a shimmer shade, has an iridescent finish.

Fourth, Tigers Eye, a copper shade with a pink shift, has a micro-glitter, metallic finish.

Fifth, Vibes, a rose shade, has a metallic, micro-glitter finish.

Six, Antidote, a peach shade, has a matte finish.

One, Hexed, a red-brown shade, has a matte finish.

Two, a deep green with a red shift, has a metallic finish.

Three, a royal blue shade, has a metallic micro-glitter finish.

Four, a sheer violet shade, has a sparkle finish.

Five, Meditate, a bronze shade, has a metallic micro-glitter finish. 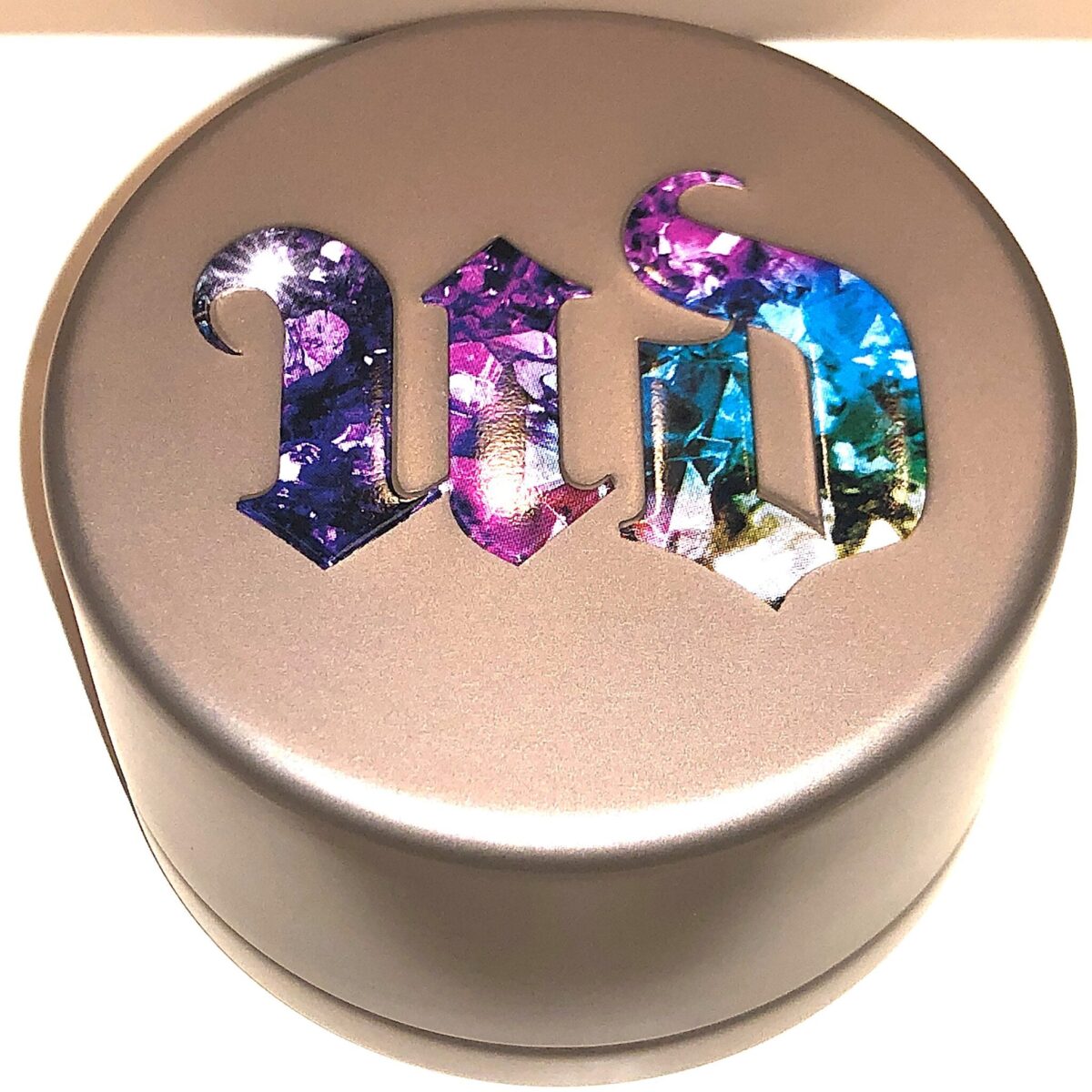 Next, the Stone Vibes Highlighter, a multifaceted highlighter, is in the shape of a crystal. 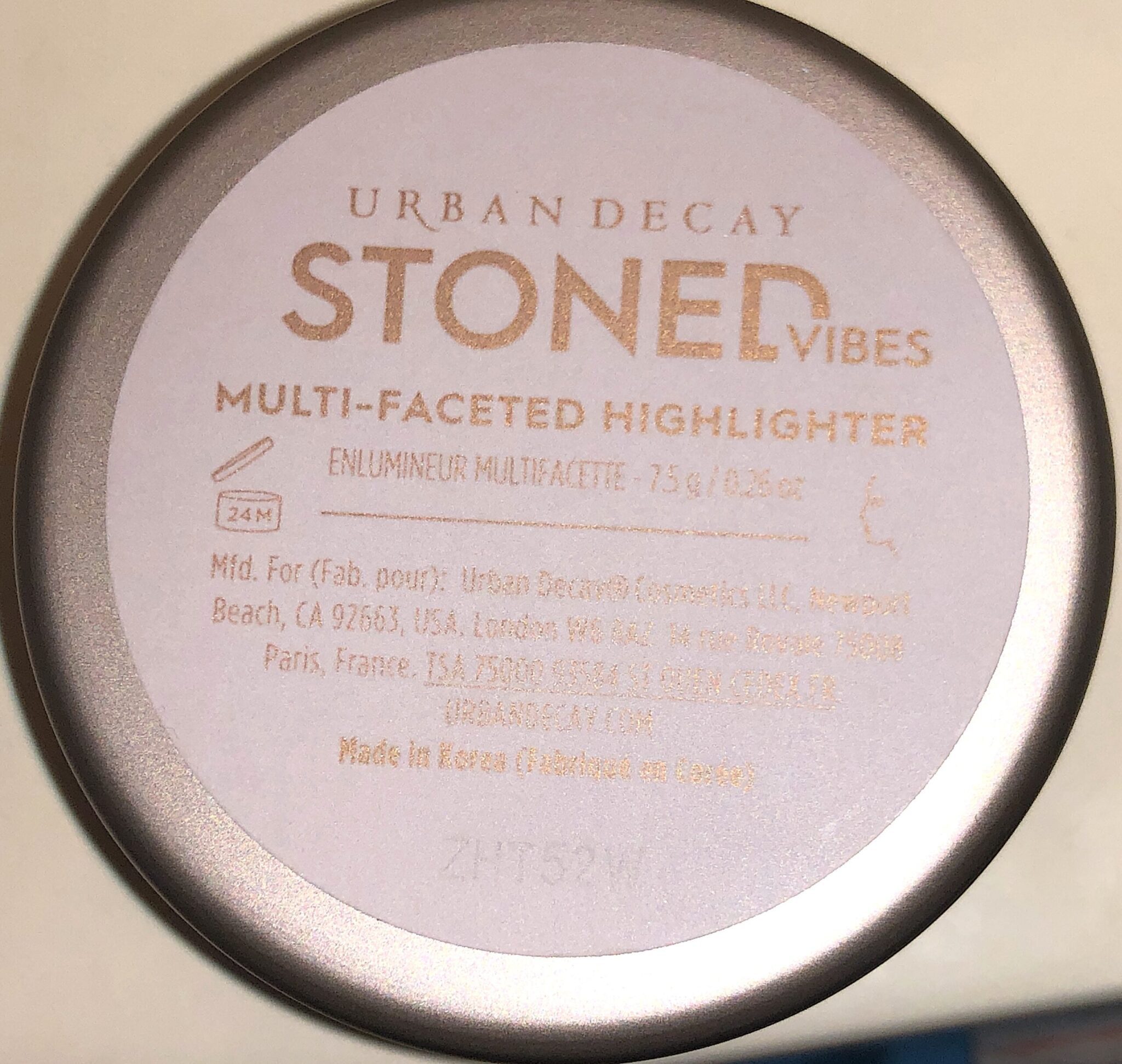 Also, the highlighter is infused with tourmaline. 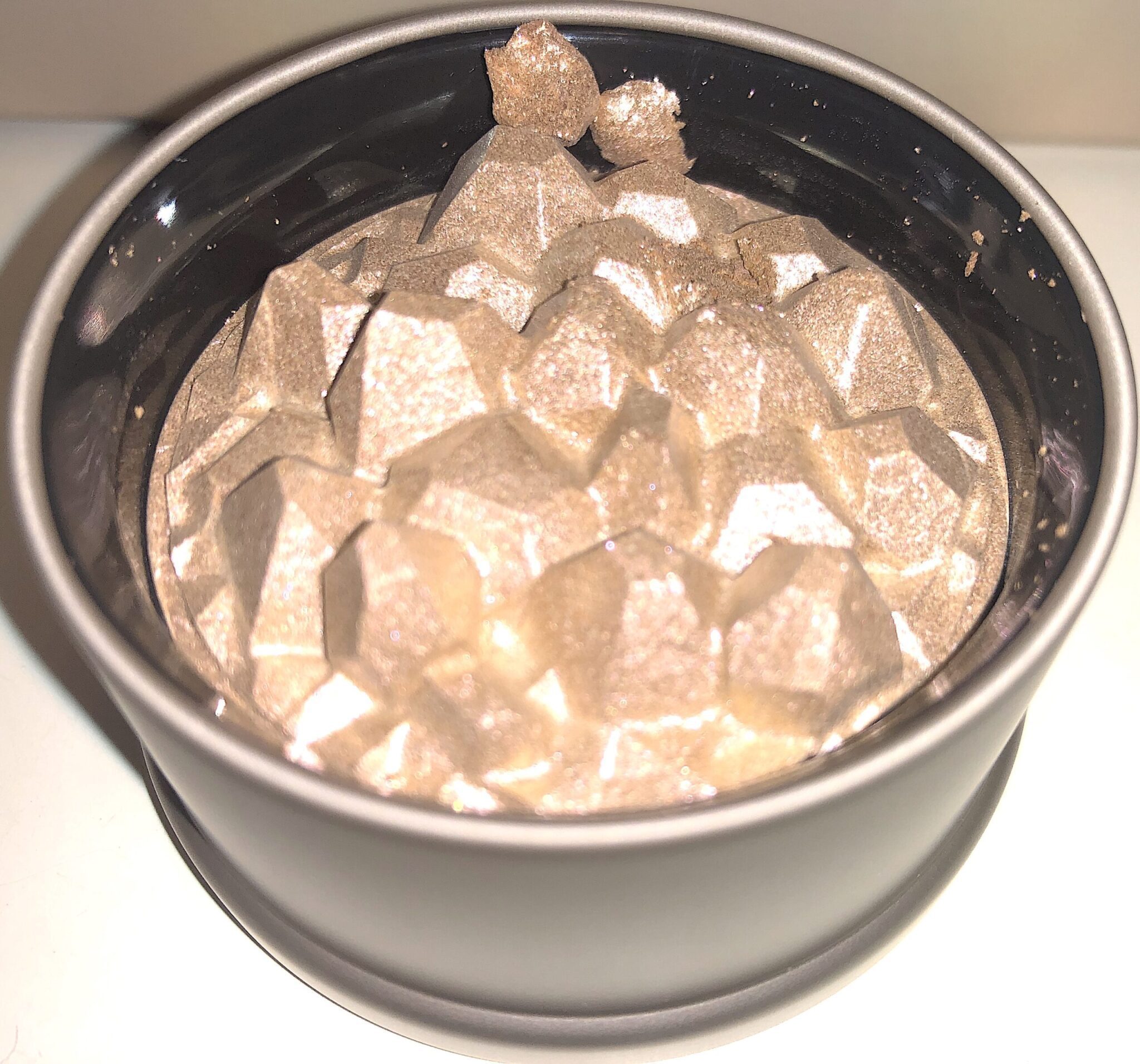 Even more, the highlighter, a rose gold shade, has a glowing holographic sparkle, and a luminous, lasting, radiant finish.  Wear this where ever you want a glow.

For example, wear it on the high points of your face, cheekbones, and your decolletage. 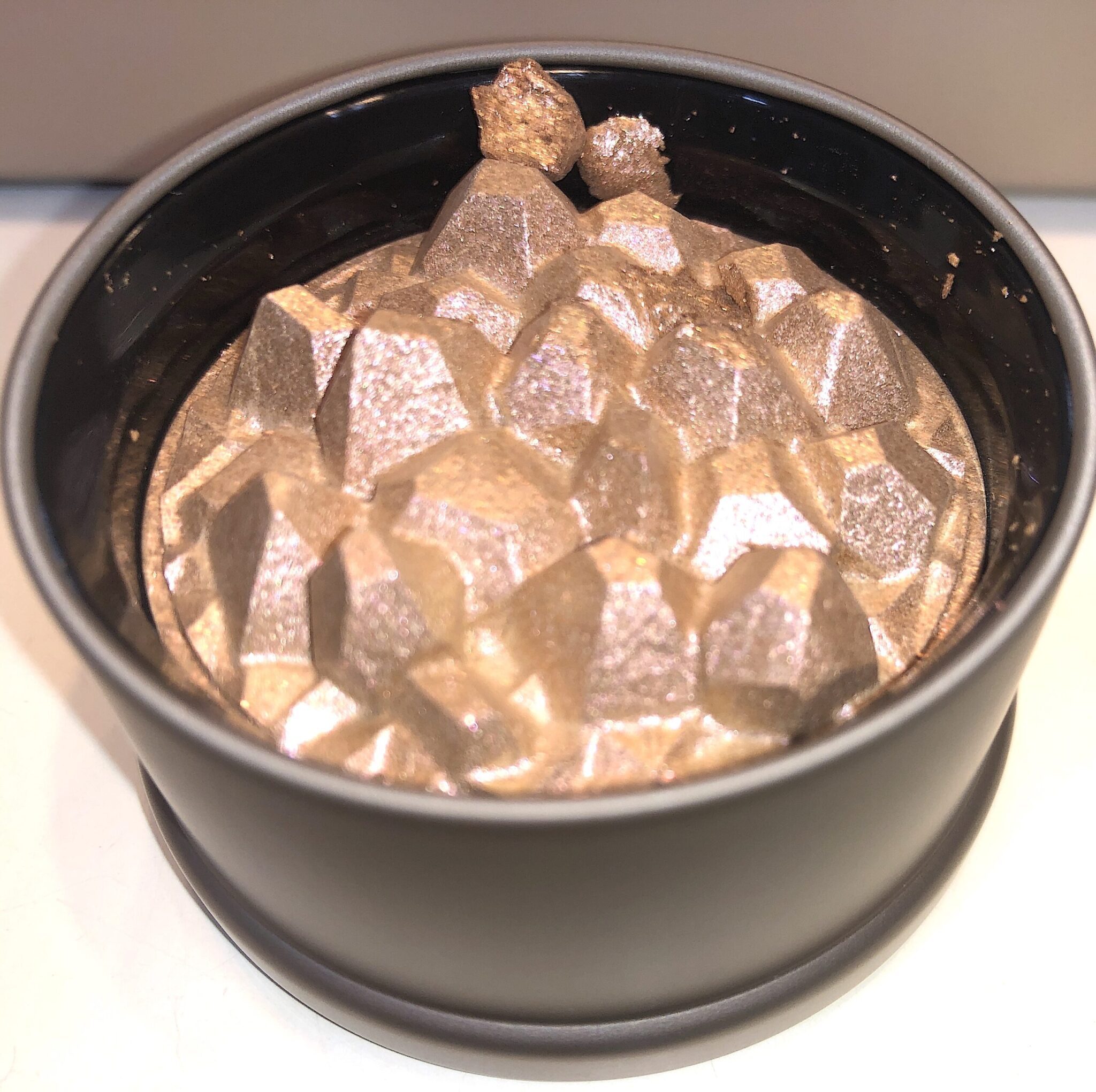 First of all, the 24/7 eyeliner pencils are waterproof.

Also, the pencils easily glide onto your eyes.

The reason is, they are very creamy. 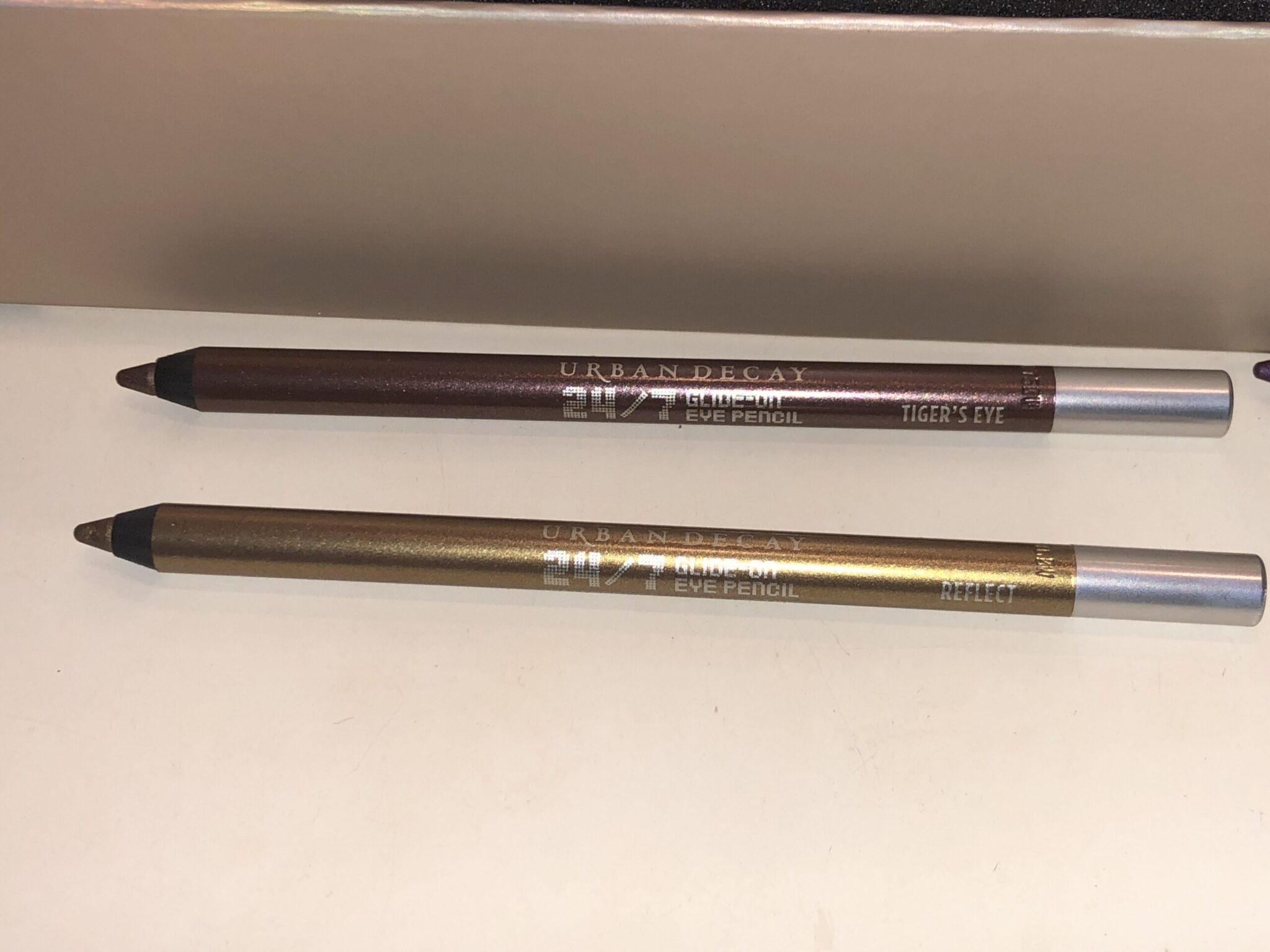 Although, once on, wait a few seconds to let them dry. 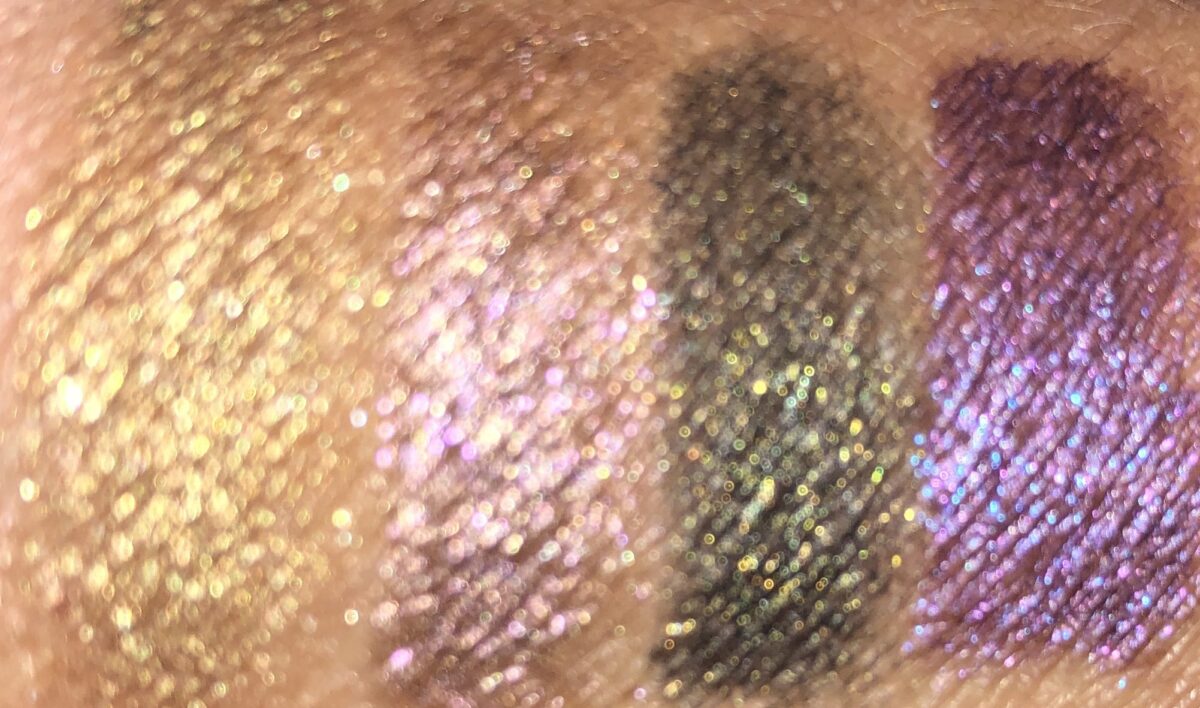 Once they are dry, they won’t budge!

First, Reflect, a green-gold shade, has a metallic finish.

Next, Tigers Eye, a mauve shade with a pink shift, has a metallic finish.

Then, High Vibes, a black shade, has a gold glitter finish.

Last, Raw Energy, a purple with a blue shift, has a metallic finish.

To begin, the four Multidimensional Lip Gloss shades give your lips a high-shine finish.  Even more, the formula includes a vanilla-mint flavor.

In addition, it is a sheer formula with high glitter.

First, Mercury RX, a periwinkle shade, has a holographic sparkle.

Next, Power High, an orange shade, has a gold shimmer finish. 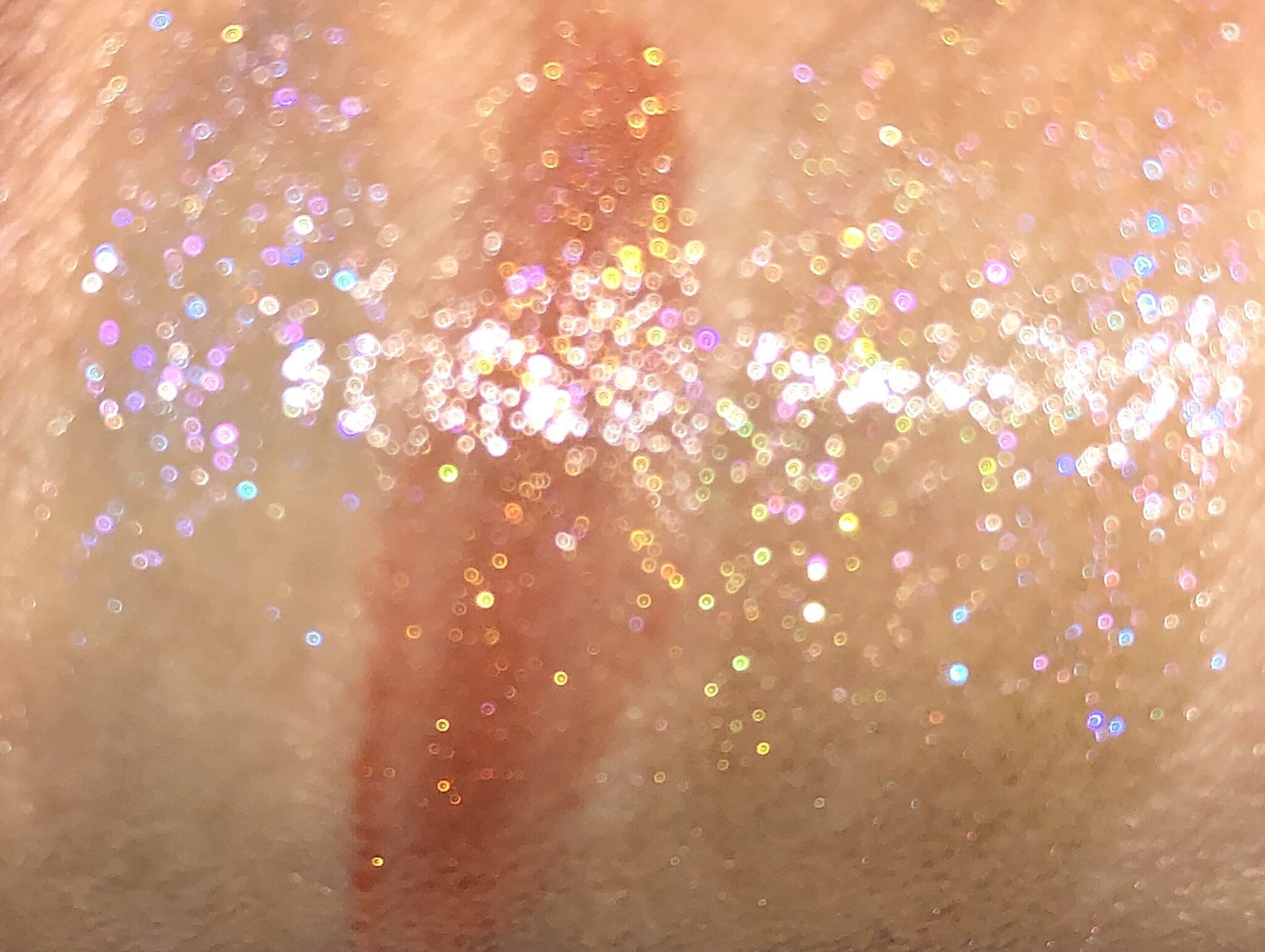 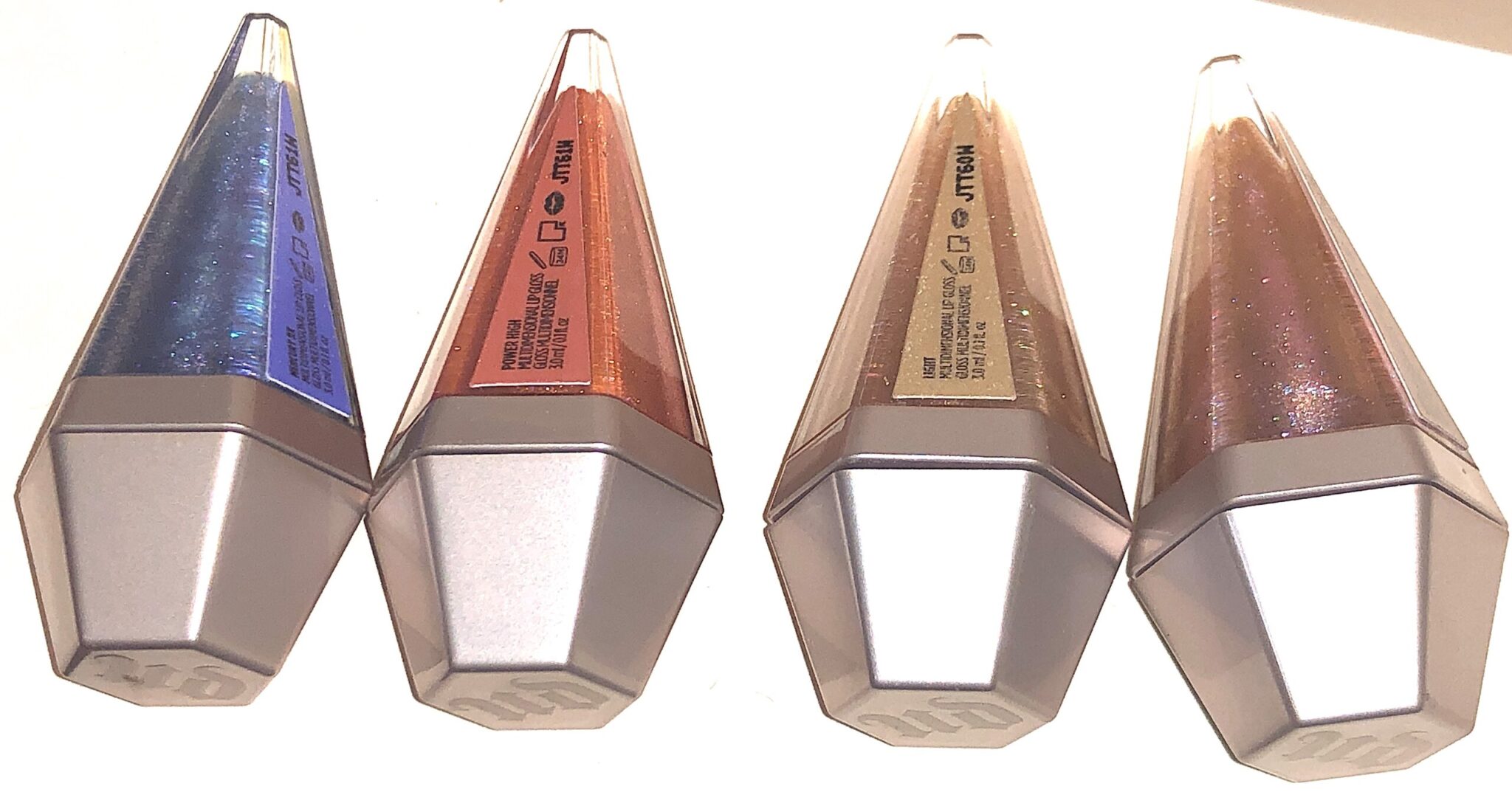 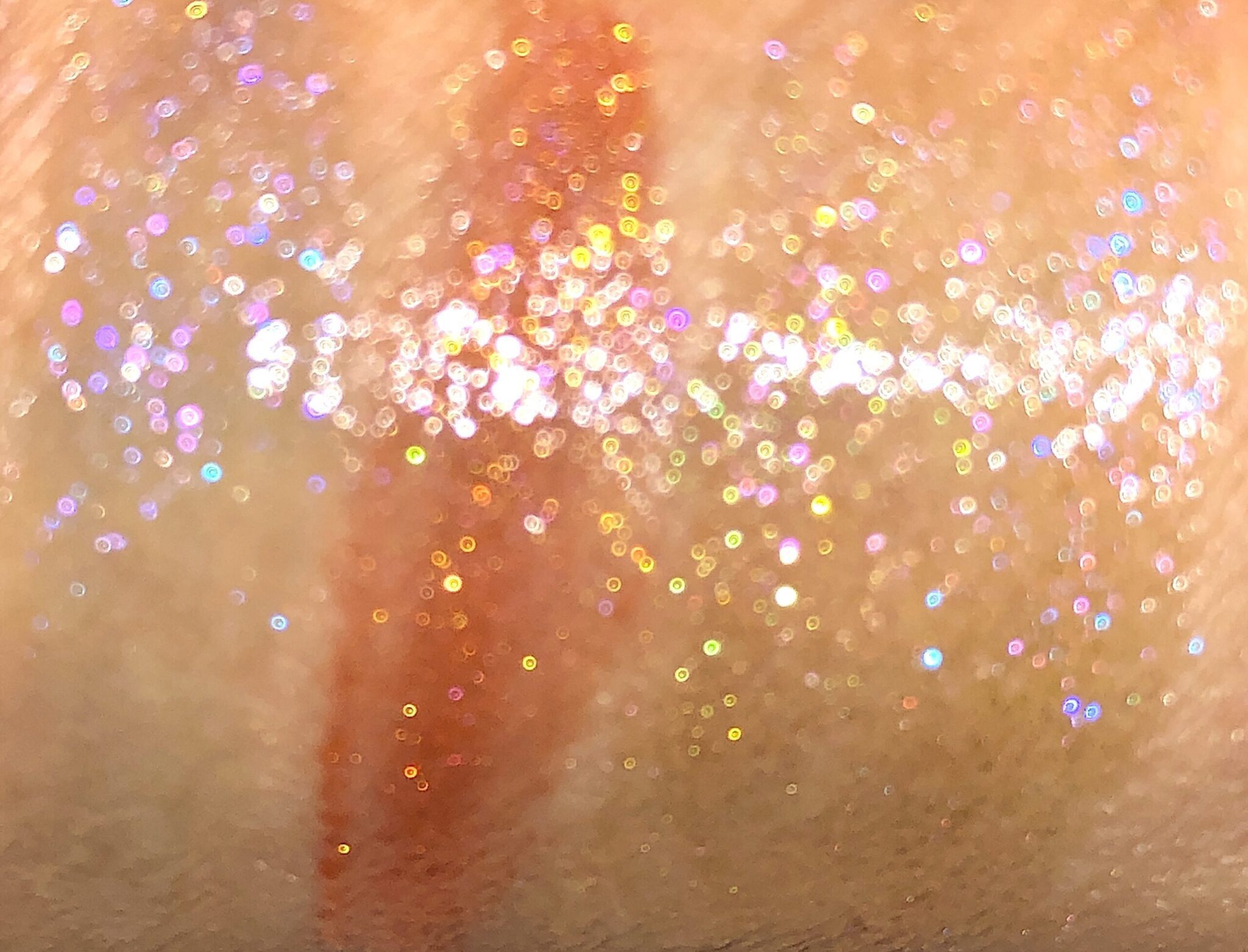 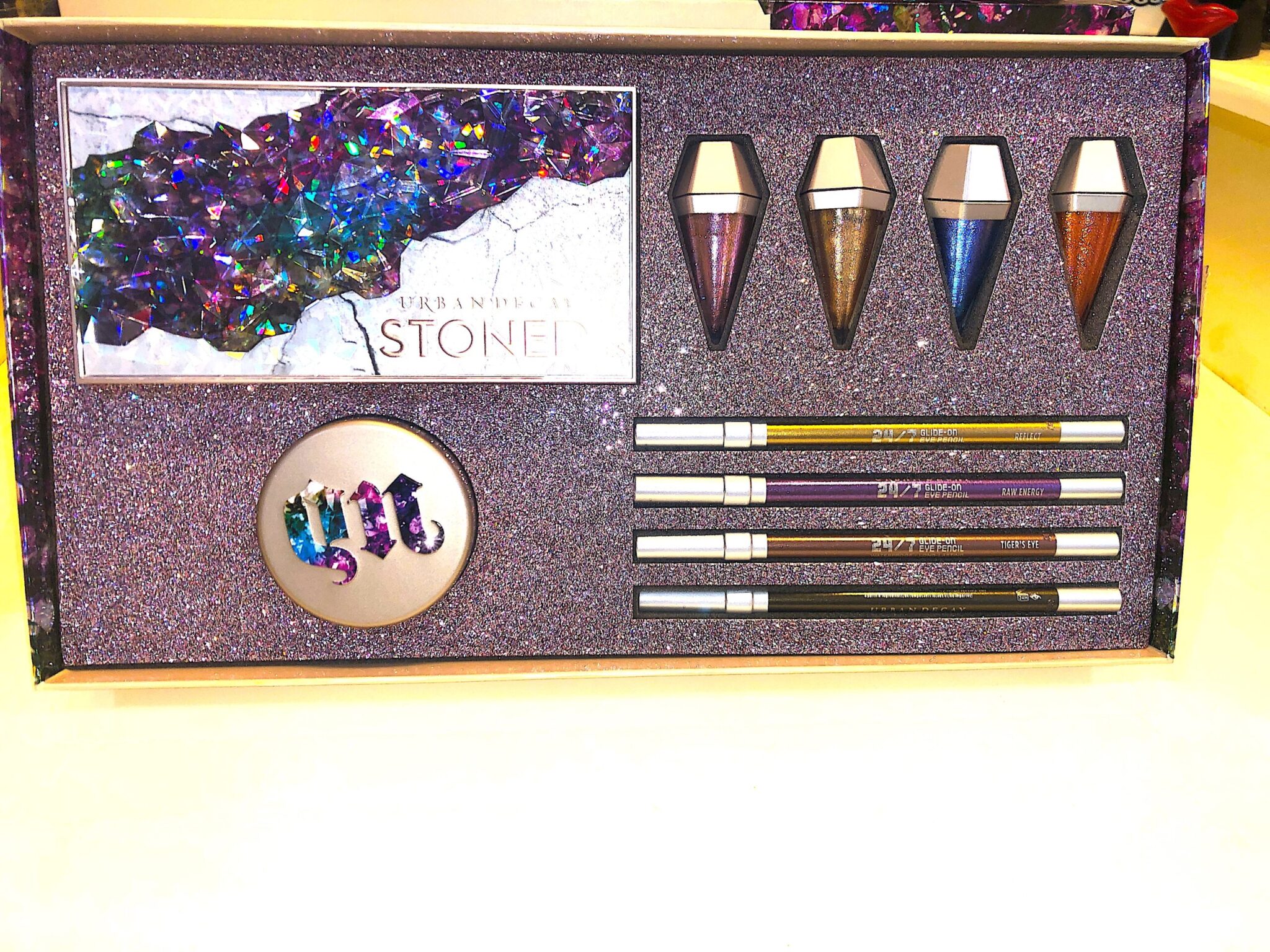 One thing I love about the makeup in the Vault Gift Set is all the products are vegan and cruelty free. Even more, I love the stone theme.  Also, I think it is neat that the formulas for the eyeshadows and the highlighter, are infused with tourmaline.  Whether it works, or not, is. up to you.  Just looking at these gifts, in their box, would give you good vibes.  I love everything in the box!  The reason is, it is well curated!

Finally, the eyeshadow, and the highlighter are unique. 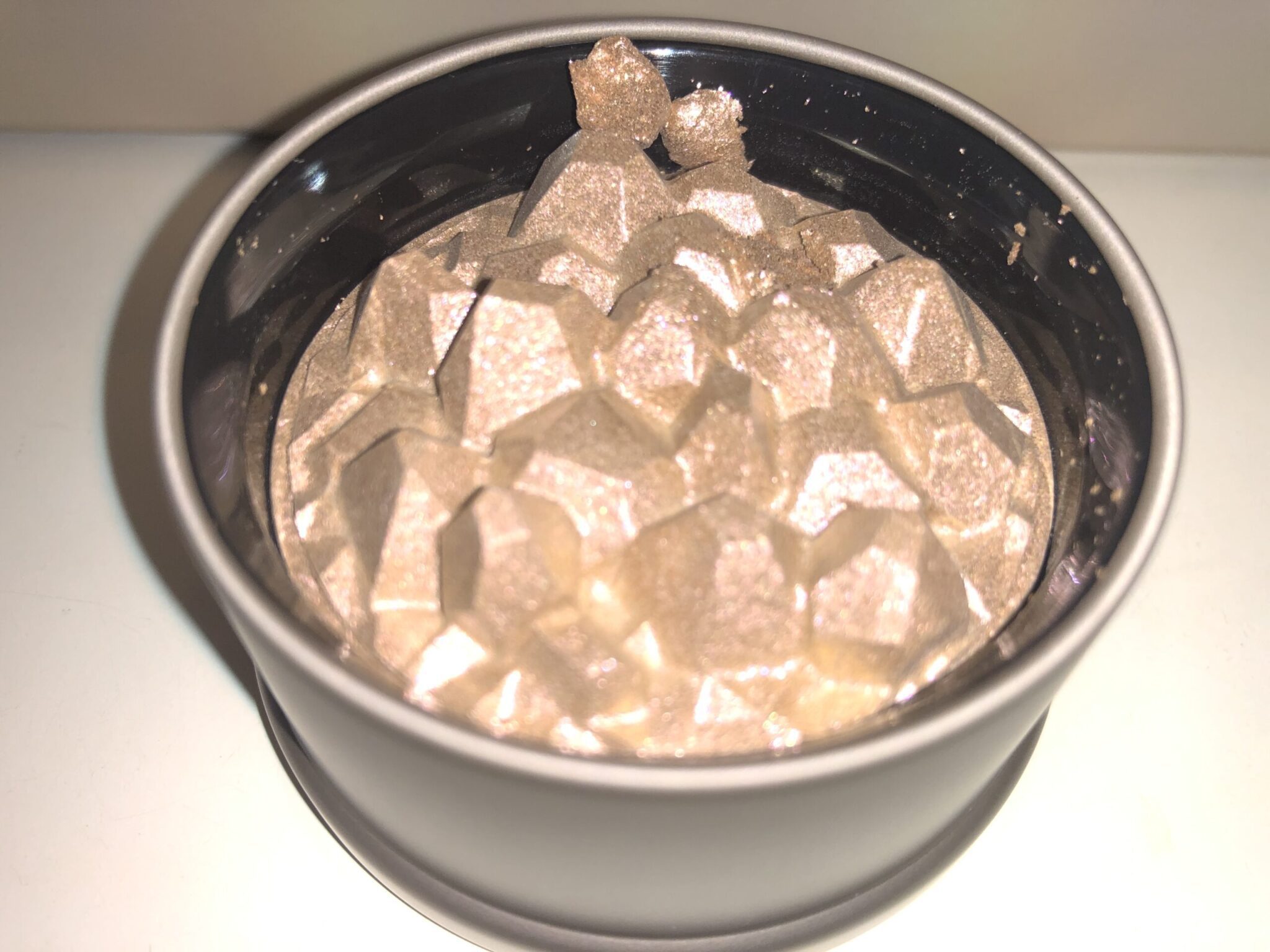 Especially, I am crazy about the highlighter!  It’s created to look like a crystal!

THE PRODUCTS IN THE STONED VIBES VAULT GIFT SET

If you, or someone you know, need a lift right now, this gift set really will lift you up.  You can’t be depressed when you see this!  Believe me, things are not so exciting right now.  We are all suffering from Covid Fatigue.  It’s not fun!  So, anything that you can do to cheer yourself up, while staying safe, do it!  We just have to be patient a little while longer.  There is an end to this.  The vaccine will be here by the spring!  Stay Safe Until Then.